However, according to the U.S. Consumer Product Safety Commission, there are an estimated annual 15,500 fires, 10 deaths and 10 injuries due to clothes dryer fires. Several hundred people a year are also subjected to carbon monoxide poisoning from improper dryer vent setups. The financial costs come to nearly $100,000,000 per year. In some cases, faulty appliances are to blame, but many fires can be prevented with proper dryer venting.

Lint accumulation and reduced airflow feed on each other to provide conditions ripe for a fire. Lint is a highly combustible material, which, interestingly enough, is one of the ingredients in a recipe for homemade fire starters. A number of dryer vent problems contribute to this.

Traditionally, most clothes dryers were in the basement. However, nowadays many newer homes tend to have dryers located away from an outside wall in bedrooms, bathrooms, kitchens and hall closets. These new locations mean dryers tend to be vented longer distances, and vents are generally installed with sharp turns and bends to accommodate the structure of the home. As a result, dryer vents are harder to reach, and also create more places for lint to gather. The ideal solution is to have short, straight, dryer duct venting. However, a dryer vent booster, while not the ideal approach, can improve your dryer venting in cases where your venting is longer and/or has more bends than it should. In addition to creating a fire hazard, if the venting is too long and/or has too many bends, it will cause your dryer to take much longer than necessary to dry loads.

Lint is the biggest culprit here. As you know from cleaning out your lint filter, dryers produce very large quantities of lint. Most people assume their lint traps catch all the lint, and that all they need to do is clean them out after each load. However, a significant amount of this lint is not caught by the lint trap and builds up inside the dryer - even on the heating element! If you are skeptical, try this experiment: pull out the lint trap and look underneath it- you may find large mounds of lint staring at you. Lint can build up on the heating element and in other places inside the dryer, causing it to overheat and possibly catch fire. As a rule, a fire starts from a spark in the machine. However, improper clothes dryer venting practices outside the dryer can play a key role in this process. 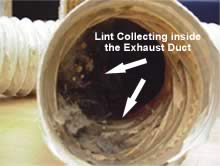 There are many improper dryer vent practices which restrict airflow and lead to lint buildup, the two main preventable causes of clothes dryer fires. Some of the most common and important dryer vent mistakes are:

Your Dryer May Be Failing If:

The clothes are taking an inordinately long period of time to dry, come out hotter than usual, or if the vent hood flapper doesn't open. Maintenance is needed in these cases.

Only You Can Prevent Clothes Dryer Fires

Disconnect, clean and inspect the dryer duct run on a regular basis, or hire a professional company to clean the dryer duct. This will reduce the fire hazard, increase the dryer's efficiency, and increase its lifespan. In addition, you are less likely to experience water damage.

Keep Your Dryer as Lint-Free as Possible

From The Laundry Alternative

Why do fire trucks sometimes travel with their lights and siren on, and then all of a sudden turn them off?

When a call for service is dispatched, CFD responds with specific apparatus and manpower, depending upon the type of call. When a CFD representative (Chief Officer, first-in Engine, etc) arrives and conducts a "size-up", additional resources may be canceled from the call or told to reduce their response to a routine response.

My fire alarm went off and I contacted my alarm company and told them everything was OK and not to send the Fire Department and they still showed up, why?

When a fire alarm company contacts our dispatch center (Johnston County E-911 Communications) and they dispatch us, we have to respond to the incident for insurance purposes. Sometimes, the dispatcher will inform us that the alarm company has requested to cancel, and at that time the Officer in-charge will inform the additional responding apparatus to cancel and the closest unit will respond to the incident. When we arrive we check for things such as:

Can I be fined for false fire alarms? What constitutes a false alarm?

Yes. For Town of Clayton residents, there is an alarm ordinance. A false alarm is an alarm in which the system malfunctions for no apparent reason, or where a system is activated (manual pull station) when there is no fire. A fire alarm that goes off for accidental reasons such as burnt food is not considered a false alarm (the system is doing what it's designed to do) but repeat offenses may result in suggestions and/or recommendations from the Fire Marshal.

If you have a question you don't see in the FAQs, feel free to contact Clayton Fire Department at 919-553-1520, or you can "Like" us on Facebook and ask us there!